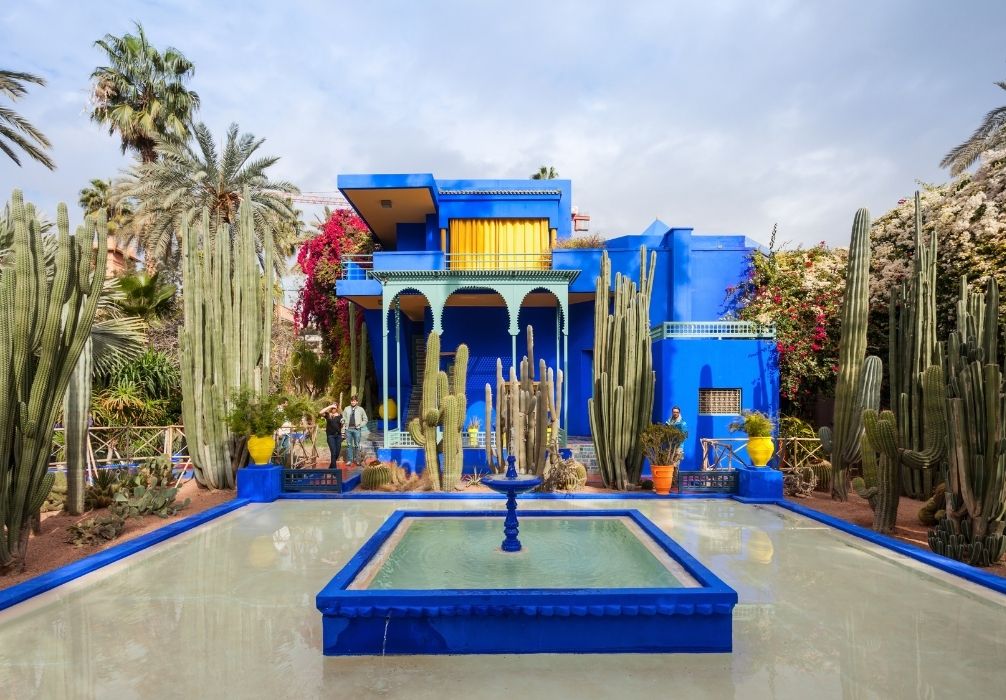 If there was only one city that could sum up the exotic charm of Morocco, it would be Marrakech. Actually, the name of the country derived from the name of the city, the capital itself under the Almoravid dynasty, and the Almohad Caliphate. You know what you came for.

The medina, with its buildings and ramparts of beaten clay (responsible for the alias “Red City”) is a mesmerizing busy place with distinctive scents and skillful artisans whose pieces of traditional art end up in the colorful souks. Everything about the architecture is fascinating: the many riads, small palaces, the patios, the view over the city.

A whole magnetic atmosphere that comes together at the pinnacle of it all, Jemaa El-Fna Square. But Marrakech is much more than that, it is a city for those passionate about history, culture, art, modernity, music festivals. It is a place to fall in love with memories of Morocco’s vivid soul.

Marrakech lies in the fertile Haouz Plain, south of the Tennsift River. Because of its location in the center of Morocco and easy access by plane, Marrakech is the obvious point from which to discover the rest of Morocco. It will not take long to get to the beautiful coast, the wild High Atlas Mountains region, or the desertic Sahara.

Before you start experiencing the riches and diversity of Morocco, the city has a lot to explore. Marrakech is the capital of tourism in Morocco, a wonderful city that, despite having many tourists, never loses its exotic essence and never ceases to amaze. It is frenetic but also peaceful when you find the right places. Join the agitation and haggle of the amazing souks displaying the most incredible pieces.

Find beauty in museums, rooftop restaurants, and unbelievable riads. Learn how to prepare Moroccan food in a cooking class. Let yourself go in a bath at a relaxing Hamman. Getaway into the more modern districts of Gueliz and Hivernage. We promise that Marrakech is so much more than you expected.

Fes, Marrakech, Meknes, and Rabat. These were, in order, all the Imperial cities of Morocco. Marrakech, founded in 1062, had its turn under the Almoravid and Almohad dynasties. It was from here that the Berber Almohad Caliphate governed much of northern Africa as well as southern Spain.

Many more ruled from Marrakech in the subsequent centuries: the Marinids, the Wattasids, the Sharifian families, the Saadians. Complete peace was late to arrive, as the Europeans tried or succeeded to invade Morocco: the Portuguese, the Spaniards, and finally the French. The presence of all these peoples resulted in a rich blend of cultures which can be found still today in the varied architecture of the city.

What to see in Marrakech

Let’s start with the obvious: Djemaa El Fna. It’s like Morocco in one single square. Storytellers get together with fortune-tellers, sellers, musicians, snake charmers,… You name it! And don’t forget the Moroccan food you can get from the stalls. Or the rooftop cafes and restaurants all around, of course, from where you can see all the madness unfold. The Café du France is a historical classic and one of the oldest in the city. Another clear apogee in Marrakech is a visit to the zigzaggy medina district to absorb its sounds, scents, and colors while going through the different souks. Find shoes in the Babouche, carpentry in the Chouari, perfumes, and spices in the El-Attarine, leather in the Cherratine.

But there is so much else to see. Tiskwin Museum transports us back to the time in which caravan routes allowed trade between Morocco, Algeria, Mauritania, Niger, Senegal, and Mali. Dar Si Said Museum displays Moroccan traditional handicrafts. Marrakech Museum showcases historic art objects and contemporary art inside a beautiful palace. Ben Youssef Madrasa is a religious school built in the 14th century. A great opportunity to see the architecture and ornamental arts from that period. If you are getting in or out of Marrakech, use the Bab Agnaou, probably the most delightful gate in the city, the one used by the ruler.

As you approach Marrakech from the distance, Koutoubia Mosque’s minaret becomes taller and taller. When you get next to it, you will understand the legend telling how the first muezzin (the man who calls believers to prayer) had to be blind in order not to be able to overlook the ruler’s harem. The mosque itself, built-in 1162, is an engineering triumph of Almohad architecture. You can only go in if you are a Muslim.

Bahia Palace is another masterpiece that you can’t miss in Marrakech. Constructed in the late 19th century, it was the residence of the Grand Vizier Bou Ahmed, who served Sultan Moulay al-Hassan I. Zellige tiles form graceful geometrical designs. The painted wooden ceilings have the same theme. Then you will find details in ornate wrought iron, the arches, the doors and windows, the columns. The two highlights in the palace are the massive marble grand courtyard and opulent salons of the haram area. To top it all, there are citrus trees and banana-leaf plants that add tranquility and freshness. Everything is just magnificent.

Picture the most exuberant tropical gardens with ferns, palms, and cacti and maybe, just maybe, you can envision the vibrant blue Majorelle Gardens. It was built to become the Cubist villa and studio of French Orientalist painter Jacques Majorelle. After his death in 1962, it was bought by the French fashion designer Yves Saint Laurent, whose life and fashion legacy can now be seen in a museum inside the gardens.

Even though Badi Palace is now partly in ruins, we can still admire its mosaic-tiled floors and the high surrounding walls. They are a reminder of this once opulent palace put up by the Saadian ruler Al-Mansour. Next to some nests belonging to a few storks, use the vantage point to see the medina from the top of the walls.

To find out about the influence of the Jews in Marrakech, visit the Mellah, their old quarter. Its construction dates back to the 16th century. Nowadays, it is inhabited mainly by Muslims but you can still see the well-restored small synagogue and the extensive Jewish cemetery.