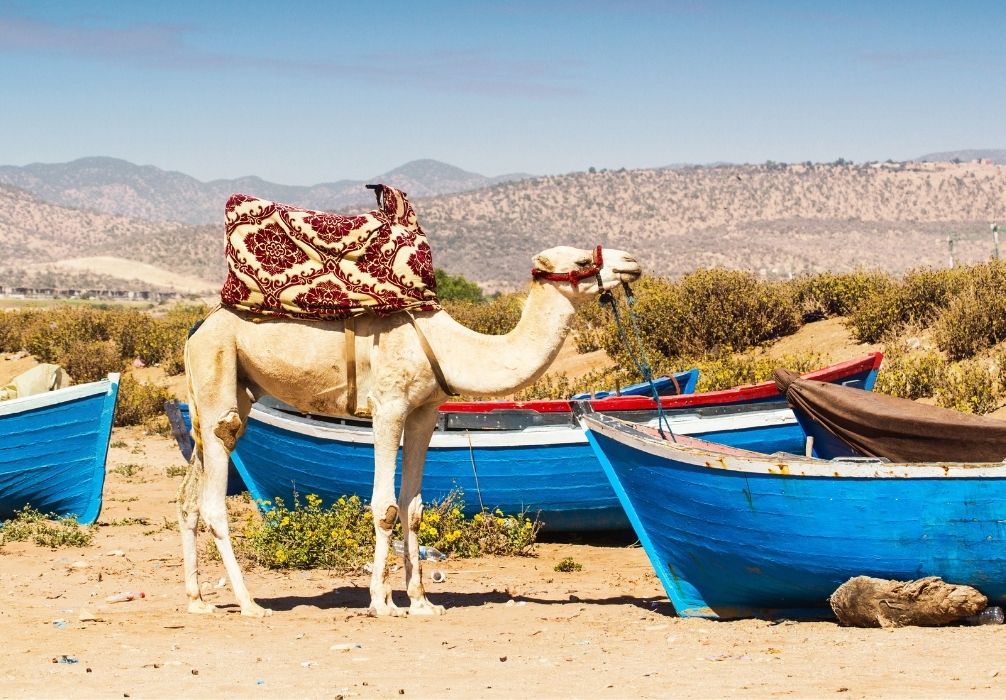 Agadir is one of the best beach destinations in Morocco, perfect for those seeking a place to relax after, or before, venturing into the Atlas Mountains, the Sahara Desert, or the bustling Imperial Cities. The mild weather of this all-year-long sunny city draws visitors looking for the modern peaceful seaside life, marvelous food, and compelling nightlife.

Agadir is located in the South of Morocco, overlooking the vast Atlantic Ocean. This is the capital of the Souss-Massa-Drâa region and the largest fishing port in the whole kingdom of Morocco. A strong indication of how well you will eat in the many restaurants. The city is simple and possesses a contemporaneous architecture of white buildings along wide avenues that stretch to visit lush gardens.

A fine sand beach destination no doubt, Agadir is also known for the Souss-Massa National Park, a must-visit during your visit. However, you will spend most of your time on the splendid Agadir Bay, by the hot clear water. Spend your daytime in the beaches, the pool, the spas, the hammams (or Turkish Baths), the golf courses, the restaurants. Go on boat rides and engage in your favorite water sports. At night, head out to the entertainment areas and have fun all night long.

The name Agadir was first used in the year 1510 when the settlement was no more than a small unimportant village. It was only in the 16th century that Agadir’s bay started to become important because of the trade of wax, leather, and sugar with Europe. In exchange, they got fabrics, weapons, and other manufactured goods. After an earthquake in 1731, Agadir lost its importance, even after the reconstruction took place a few decades later, mainly because the Sultan gave priority to the trade being made in Mogador (today Essaouira), which then belonged to Portugal.

Only in 1881 did Agadir reestablish commerce and start to recover its population, especially after the port was built by French troops. From 1930 on, the city gained more and more importance, with the construction of a modern center and the growth in the mining, fishing, and agriculture industries. Tourism gained momentum in the 50s, making the 1956 Agadir Al Massira International Airport build a necessity. In the aftermath of a new major earthquake in 1960, King Mohammed V started to turn Agadir into the city we still see today. Modern architecture contrasts with the Moroccan landscape, boosting the city into becoming one of the most important tourist centers in Morocco. The obvious maritime heritage also allowed the city to develop into the largest exporter of sardine in the whole world.

What to see in Agadir

The understandably evident place to go to first when on Agadir is the Seafront Promenade (also called Corniche de Agadir), a long stretch of 3 mi (5 km) of bars, cafés, pubs, and shops. Take a stroll in Agadir Marina too, since you love the ocean so much. Check out every single beach near the city center but also Anza Beach, further north of the city, a great place to surf and sunbathe, as well as shopping. The nightlife makes Agadir life pop with a different tone and rhythm.

Only an hour’s drive away from Paradise Valley, in the Souss-Massa National Park, is considered a true paradise in Morocco. Leaving the sea behind, you have the opportunity to explore a valley surrounded by rocks, green areas, natural pools filled with clear waters, and small waterfalls. A refreshing place to be in the hotter interior part of Morocco.

Agadir Medina is the place to visit when trying to have an idea of ancient Agadir before the earthquake that destroyed most large structures. Take your time walking around and get lost in the narrow streets with walls decorated with Zellige tiles, a secular art form featuring rich coloration and intricate textures. Go through elaborate doors and learn the skill of the artisans. Appreciate the music played all year round on these streets and celebrated during the world-famous Timitar Music Festival of Agadir, one of the first African music festivals.

Souk al-Had is the largest traditional market in Agadir. This is where you will find the typical products you come to expect in a trip to Morocco, from crafts to spices, clothes, and shoes to food. Don’t forget to haggle!

The Amazigh Heritage Museum is dedicated to the Berber heritage in the Souss Massa Draa region. Open 40 years after the destruction of Agadir, in the year 2000, it displays more than 900 pieces related to the Amazigh culture and traditions. The highlight of this museum is the Massa Necklace, which you can see in the treasure room. Visiting this place gives you a very good idea of the daily life and traditions of the Berber populations.

The Kasbah Agadir Oufela is, like anywhere else, the central part of the citadel. So, we are talking about the fortification. Only the old walls are left standing, on top of a hill with great views over the city of Agadir and the ocean. If you visit the kasbah at sunset and wait for the sun to disappear on the horizon, you will get to see Agadir under an orange light, as well as the city with its lights on and a brand new atmosphere after dark.

Jardin de Olhao, built-in 1992, is probably one of the nicest Agadir’s gardens, located right on FAR Avenue. Some people also call it the Portuguese Garden, a reference to the history of the city. The Portuguese were all over the Moroccan coast at the beginning of the 16th century and actually founded a fortress at the front of the beach of Agadir.