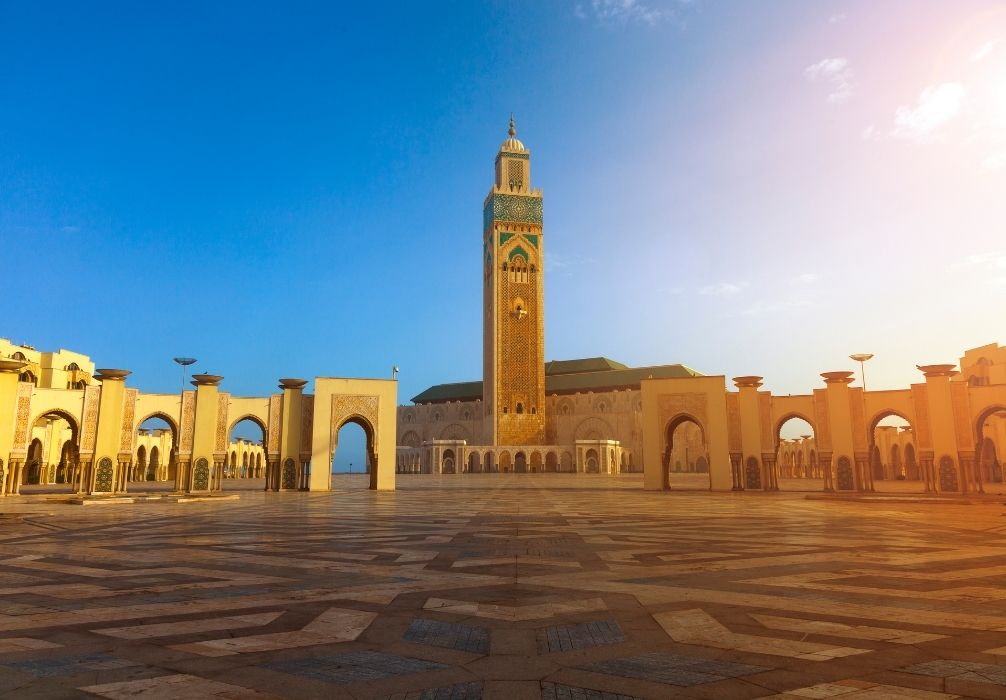 They say Casablanca is not exactly for tourists… That alone is an excellent reason for you to go there. Mingle with the locals in the biggest and most cosmopolitan city in Morocco, where the French colonial legacy interlaces with the Arab culture. Going about Casablanca means trying amazing food; discovering a lively art scene among art deco buildings; and having the rare opportunity, if you are a non-muslim, to admire the beauty of a mosque interior. And not just any mosque, it´s the beautiful Hassan II, the 7th largest in the whole world.

Casablanca is located on the Atlantic coast of the Chaouia plain, in the central-western part of Morocco. It is a charming city where music festivals take place in the settings of Arab-Muslim heritage and legacies of the colonial period, with beautiful palm trees leading the way towards the sound.

The white city is a must-visit for those who love the idea of the Moroccan culture merging into a metropolis of cosmopolitan restaurants and nightlife scenes. The city has been on your mind since you have watched the classic film with the same name. It’s time to see what it is all about.

Even though the exact origin of Casablanca is unknown, we do know that seminomadic Berbers have stayed in the area as late as the 7th century. We also know that a place named Anfa existed in the same location. It became some sort of a pirates’ base to assault the Christian Portuguese ships that came down the coast, being destroyed by them in 1468. Later in the same century, in 1515, the Portuguese came back to build a new town called “Casa Branca”. After the massive 1755 earthquake destroyed the city, the Alawi sultan Sidi Muhammad ibn ʿAbd Allah took care of the reconstruction in the late 18th century. Later settlers came after that. The French named the city “Maison Blanche”, the Spanish merchants “Casablanca”, all names meaning “White House”.

During the French occupation, which started in 1907, Casablanca became the main port of Morocco and the development never stopped ever since. The city also gained international relevance during World War II because it was an important strategic port and the site of a large American airbase, crucial for the war effort in Europe. The Casablanca Conference, held in 1943, was determinant for the joining of the powers and strategies of the Allies, a turning point of the war. After Morocco’s independence from France, in 1956, Casablanca grew stronger and stronger as the economic and business capital of Morocco, while the political capital is Rabat.

What to see in Casablanca

It is easy to guess that Casablanca’s past can be retrieved from what we see today. In the medina, the old Arab town is still partially guarded by the original rampart walls. Inside, there is an intricate flow of narrow streets, as well as houses whose white reflects the sun.

Outside the walls of the medina, it’s a completely distinct city, one built by the French, with large avenues that lead to big squares and gardens. Downtown, the Art Deco architecture is dominant, with plenty of beautiful historic buildings to go see. Some are in ruins, other are still in their prime. Boulevard Mohammed V is a great avenue to find such a legacy, leading to the busy Place des Nations Unies. Alternatively, look for the Grande Poste, the clock tower of the Wilaya, the Banque d’Etat, and the Sacre Coeur Cathedral. Also check out the growing art scene of Casablanca, with plenty of galleries and performances. Les Anciens Abattoirs is a great place to start, being a place run by a collective of cultural associations and artists, La Fabrique Culturelle. If you decide to escape Casablanca city center and head to the beach, Mohammedia is the one to go, full of locals looking for the coastal sand.

Hassan II Mosque is the most notorious landmark in Casablanca. This enormous building is a magnificent demonstration of craftsmanship. The waterfront location grants it marvelous angles to look at it or even photograph, in both sunny or foggy days. The outside stone floor follows fixed patterns, as we get closer to the mosque itself and its 690-feet (210-meter) minaret. The inside is even more beautiful, especially for non-muslims, who must absolutely go in and see the detailed work put into a mosque such as this one, probably the only one they will be able to visit in their lifetime.

The Cathedral du Sacre Coeur serves to show how compatible can the European and Moroccan architectural styles be. The graceful building from the 1930s is not in its better shape at the present time but you can still admire the beauty of the structure and imagine how it once was.

As stated above, Casablanca is much less touristy than Fes or Marrakesh, where the experience of the souks can be both fantastic and a bit stressful. Inside Casablanca’s medina, the ancient Berber market is not full of items made for tourists to take home a souvenir from Morocco but rather what you would expect to find in any market where the locals shop. An excellent alternative is also Marche Central, originally designed for Europeans but, of course, absorbed by Moroccans alike. Whether shopping for groceries or just sitting down in a café enjoying a traditional mint tea, it will not be long before you feel right at (a somewhat colorful) home.

The central square of Casablanca is called Place Mohamed V. During the day, it is a busy area with everything happening around many of the city’s important official buildings of mainly neo-Moorish facades (Palace of Justice, Bank of Morocco, Prefecture, the French consulate, the main post office). The central fountain and gardens provide a great set to go for a walk before the sunsets.

The nearby suburb of Ain Diab hosts Casablanca’s Corniche (beachfront district), where the action revolves around the daytime beach clubs, luxury hotels, and great restaurants.