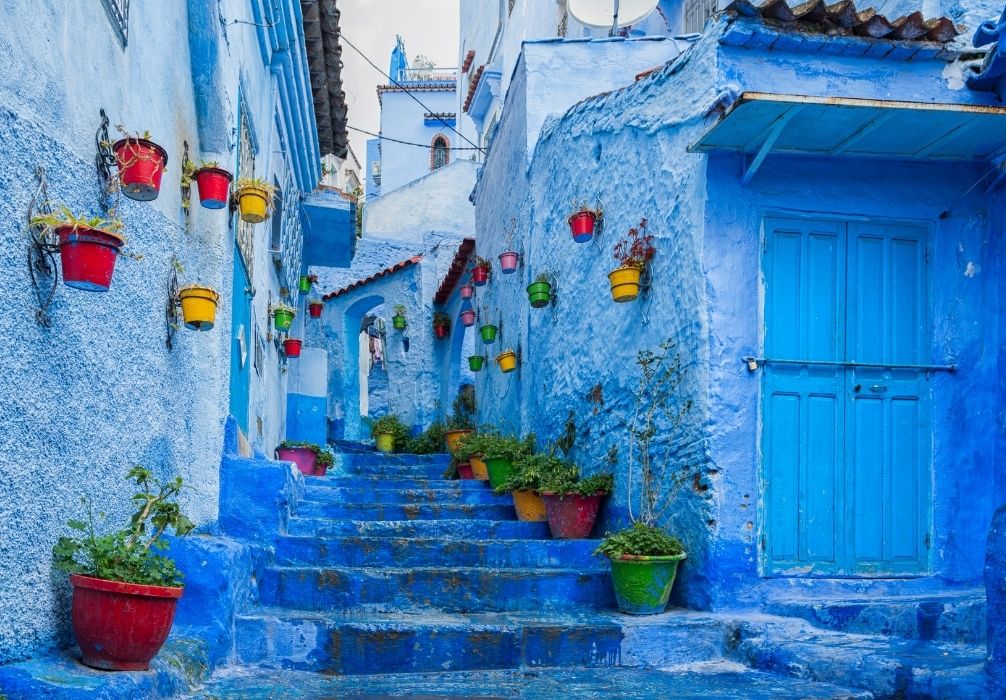 Most historic villages and cities in Morocco have a charming medina, a kasbah, souks, welcoming people. But, even in the unlikely chance that you have already visited every single one of those places, you absolutely have to come to Chefchaouen. The scenery of the Rif mountain range sets the stage for a town that goes up and down the hill, with streets that are, in fact, its main attraction. The blue-rinsed unearthly beauty of the houses escapes to the floors and the many stairs. Doors and windows add different tones of blue to the extravaganza, just like a dream. Fabulous Morocco goes further in Chefchaouen, in the food found in the squares, in the souk with vendors who are much more relaxed than in the rest of the country. Up in the mountains, it is walkers’ paradise. If you manage to get yourself out of the magnetic beauty of this town, of course…

Chefchaouen is located in the North of Morocco, not far away from Tetouan and even closer to the Mediterranean Sea. The small, mostly Berber, population of around 40,000 people is welcoming and dedicated to offering visitors what they have come to look for in town: the blue medina that mixes with the sky. Nestled between two mountain tops, the origin of the city’s name pretty much sums it all: “Chef” = “Look” and “Chaouen” = “horns”. What a sight!

If you could do just one thing in town, it would be getting lost walking up and down the hilly streets, finding more and more photogenic alleys and nooks, one after another. When you start to feel overwhelmed, simply sit down and watch life unfold or look for lovely pieces of history in a few building facades and in the interior of small museums. For some more walking, this time in the wild, go to the nearby Talassemtane National Park, a gift from Morocco’s nature.

Moulay Ali Ben Moussa Ben Rached El Alami, a distant descendant of the Islamic Prophet Muhammad, founded Chefchaouen in 1471. At first, it was just a small fortress, a kasbah erected to defend the whole area from Portuguese invaders, committed at the time to attack Morocco’s northern cities and smaller towns with expansion in mind.

With time, a medina started to develop outside the fortress to accommodate homes and other buildings behind broader walls. Local tribes, Spanish Moors, and Jews coexisted during the Middle Ages. In 1920, the Spanish captured Chefchaouen, which became part of Spain’s territory in Morocco. Later in the century, more Jews arrived, trying to flee Hitler during the Second World War, only to leave in the 1940s and 1950s to Israel. The Spanish left after the independence of Morocco in 1956.

What to see in Chefchaouen

Have we already mentioned the getting lost part of experiencing Chefchaouen??? What you must see in this Moroccan town is everywhere you look, everywhere around you inside the medina of this blue diamond. Despite its more modest size (compared to Fes, Marrakesh, and Casablanca), a souk is a pleasant place where you have plenty of time to shop around. Don’t miss the early morning bustling market either, to catch the energetic aura of locals buying products from farmers who live in close by villages and neighboring fields.

Dig into the culture of this region of Morocco by catching by on all the town views of mosques, museums and viewpoints. Get familiar with the natural landscape beyond the town limits. Go deep into the Rif Mountains for hikes and walks, either on short or multi-day trips. The Akchour Waterfalls are an excellent place to start, only 30 minutes away by car.

The Kasbah Museum (Ethnographic Museum) is right in the center of the medina, surrounded by the beautiful Andalusian Gardens, a spec of a green oasis in the midst of blue Chefchaouen. The museum contains a large collection of artifacts that help understand the history of the town and the region, with spaces dedicated to carpentry, traditional weapons, brocades, musical instruments, and traditional clothes. Throughout five centuries of history, they show the local tribes’ customs and the influences brought by al Andalus. There is also a small art gallery inside.

The unique octagonal minaret of the Grand Mosque makes the building a must-see. Only Muslims have the opportunity to go in but you will certainly be attracted to this 15th century captivating building once you hear the echoes of the call to prayer across the mountain air of Chefchaouen being heard five times a day.

Ras el-Ma Waterfall, literally “head of the water” is where you will find the locals meeting the fresh mountain water that finds its route down the mountains. It is both a place to admire nature and to watch women washing their clothes traditionally while kids play.

Plaza Uta el-Hammam is Chefchaouen’s main square. Like every village, town, or city in Morocco, this is where all people end up. The ambiance is a fusion between Arab and Spanish influences. Taste the amazing food in the street stalls or in a restaurant. Feel at ease with what goes on around you and just relax. If this is not enough to calm you down, try one of the two hammams in the square, either the public traditional facility (different days for men and women) or the more exquisite Art du Bien-être (a full spa experience).

Particularly, but not exclusively, in the sunset glow you really need to take the short hike up the hill until you reach the Spanish Mosque. It will take you about 30 minutes through the scenic path from the east end of town. You will pass some cafes and cross a little bridge before you find the trail. But the greatest reward sits at the top. The views from the mosque built during the 1920s are stunning and will make you feel humble once you get back to the blue medina.