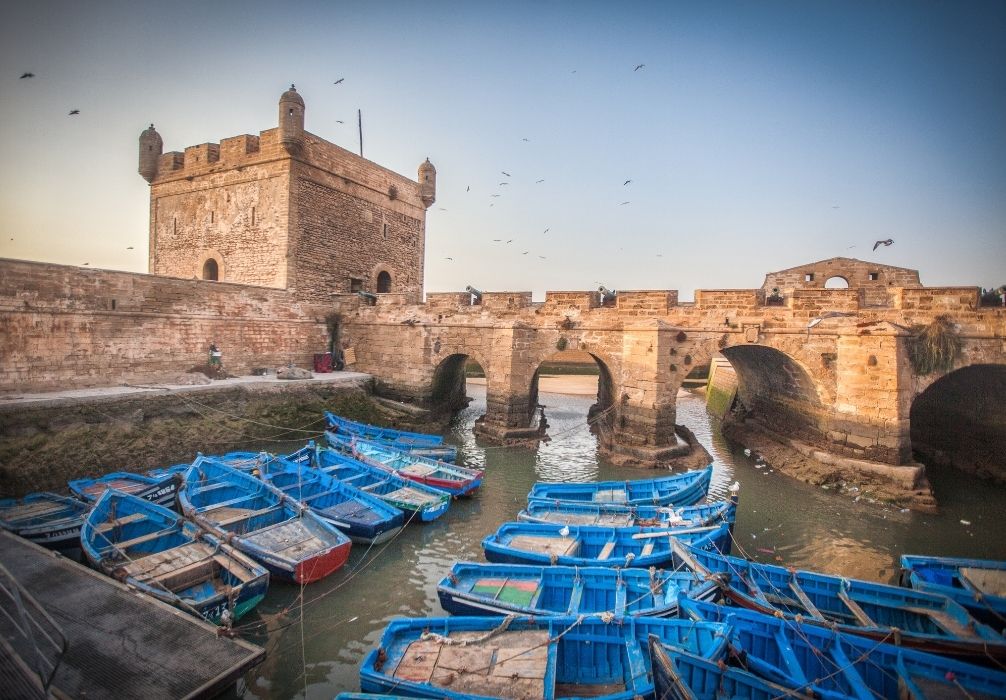 Essaouira probably has it all. Really! It is rich in history, culture, and music. The natural setting of this coastal city is both inspiring to be found upon and a blessing that brings cooler days to this once simple fishing village of Morocco. Known as the “Windy City” due to the strong trade winds, it is considered a haven for all sorts of water sports that need the power of the wind. The beige medina ramparts, white houses, and blue boats and doors are bound to leave a strong impression on everybody. It is such a charming city that it has been attracting poets, craftsmen, scholars, designers, all kinds of artists since the 18th century. You will fall in love with Essaouira too. And you will come back to this relaxing place, one like no other in the North African country of Morocco.

Essaouira is located on the Atlantic coast, 2.5 hours west of Marrakesh. Considered a World Heritage site by UNESCO in 2001, it is a formidable example of a fortified town of the mid-eighteenth century, encircled by a wall that relates to the Vauban model. The mastery to incorporate the Arabo-Muslim architecture and town-planning into the principles of European military architecture was perfectly accomplished in Essaouira. Another strong multiculturality aspect contributing to the riches of Essaouira is the presence, since its very foundation, of various ethnicities such as the Amazighs, the Arabs, the Africans, and the Europeans. Multiconfessional groups like Muslims, Christians, and Jewish living in harmony add yet another valuable contribution.

The year-round mild climate and the relaxed atmosphere turn the city into a great destination. But do not expect to be able to lie down by the beach all day long because the wind will make it difficult very frequently. Instead, take advantage of the situation and join the Atlantic paradise for surfers, windsurfers, and kite surfers. Enjoy the amazing views over the sea and the Mogador archipelago. Take in the dynamic scene of contemporary Moroccan art. Sip some tea on the rooftop terraces.

Essaouira’s past dates back to the 7th century BC. The Phoenicians used to stop in the island of Mogador while they were navigating on their way down to Black Africa. A Tyrian purple factory was later founded in the area by the Romans, originating the name of the Purple Islands, just off the coast. In turn, the area was occupied by the Portuguese and the Saadi sultans. However, the real Foundation of the city is attributed to the Alaoui Sultan Sidi Mohamed Ben Abdellah, in the 1760s.

Its advantageous geographical situation made Essaouira the port of Timbuktu, allowing the trade of manufactured products in Europe in exchange for gold, salt, sugar, and ostrich feathers. The city came to function as a harbor for Marrakesh as well. In 1844, Essaouira was bombarded and shortly occupied by the French Navy. Under the French protectorate, Mogador served as a military base. In the mid-19th century, Essaouira gained relevance among artists and stars of the music scene.

What to see in Essaouira

At the port, get near the blue fishing boats and the countless seagulls to observe the locals bringing their fresh fish and mending the nets. Look for the places you have seen in Astapor, the red city in the TV series “Game of Thrones”, or in films such as Gladiator, the Kingdom of Heaven, and Lawrence of Arabia.

Watch art being created in front of your eyes. Learn a new sport from trained experts, such as kite surfing, at a water sports school. If you are not that into doing sports, sit by the beach to see the athletes dance with the wind. If you are lucky enough to be in Essaouira in June, attend the phenomenal Gnaoua World Music Festival. Many of the jazz, pop, rock, and world music performances are even free!

Essaouira medina is where most of the land action happens. The walled old town is a place to get lost but also to find a piece of the everyday culture of Morocco at every corner. It will not be hard to come across the souks and buy a souvenir. You know what to look for in Morocco. People-watching in a café is a popular pastime here. Try it yourself.

Walk along the thick city walls and climb to the top of the massive fort. The ramparts of Essaouira are a piece of history that miraculously survived all these years. Encounter cannons between the blue and white Skala du Ville and Skala du Port. Discover where ammunition and animals were kept. Finally, use the vantage point to admire the ocean from atop.

Essaouira’s port is a hectic explosion of life, daily Moroccan life. Pretty much all day long, there will be something happening. Experient hands build boats that are going to become some fisherman’s livelihood. Boats go out of the harbor to later come in with the catch of the day. Seagulls fly frenetically all around. Everything is quite a sight! At sunset, you must return to capture the burning orange sky as a backdrop for the glooming blue fishing boats.

Getting up early in the morning will bring you the joy of being able to visit the fish market. Most sales happen between 6 and 7. By lunchtime, you will be able to taste what the ocean offered in a nearby restaurant or further into the medina.

Essaouira’s Sidi Mohamed Ben Abdellah Museum bears the name of the city’s founder. Located in a 19th-century former riad, it displays historical artifacts ranging from ancient pottery to jewelry. This is an excellent way to learn about the Berber culture, its rituals, and traditions.