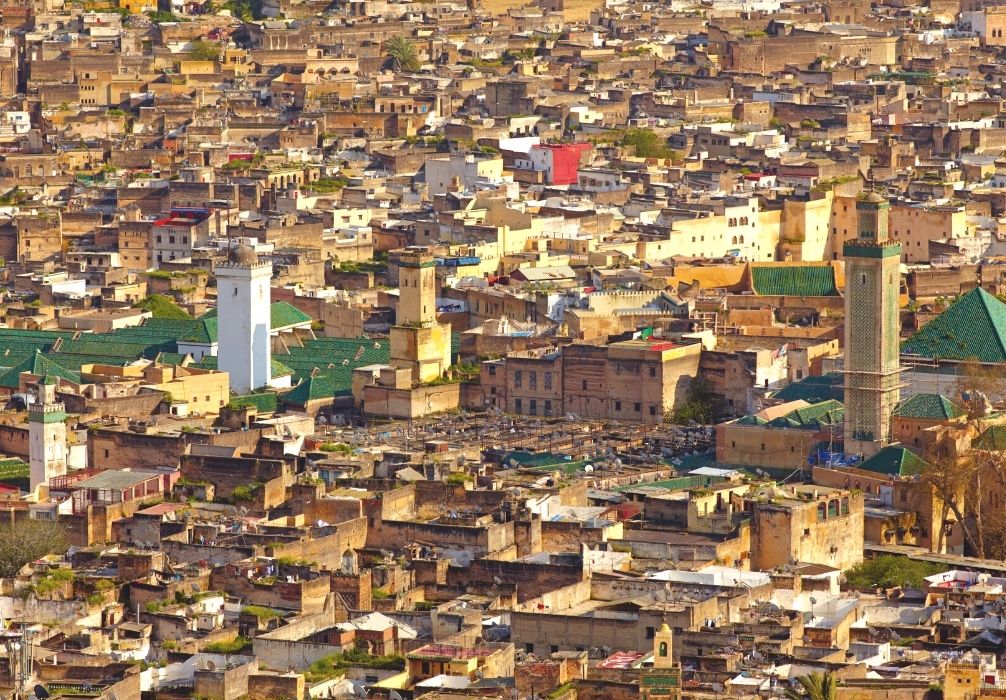 Fes was a city of many talents. In its prime, the distant 13th century, it was home to mathematicians, astronomers, lawyers, theologians, philosophers, scholars of every kind. They needed houses, while kings wished to make palaces, mosques, and madrasas. So, that attracted the best craftsmen. Trade came along, with merchants offering exotic pieces from the silk roads and sub-Saharan trade routes. At some point in history, Fes became the largest city in the medieval world! Truth is, the world hasn’t changed that much in the interior of the medina. Today, it is the largest car-free urban area on Earth, a spectacle like no other. Imagine entering a time machine and coming out in Fes.

Fes is one of the four Imperial Cities of Morocco (together with Marrakesh, Meknes, and Rabat). It is located in the northern part of the country, away from the coast, near the foothills of the Atlas Mountains, and on the crossroads of ancient caravan routes. Some say that Fes is the most Moroccan city in Morocco. They may be right.

Even UNESCO recognized the importance of Fes el-Bali, the oldest neighborhood. The organization argues that it represents an exceptional architectural, archaeological and urban heritage while, at the same time, it is capable of transmitting a lifestyle and culture of its own, in spite of now being with us in the 20th century. We agree entirely! And you will too once you find some of the military, civil and religious monuments while you navigate the narrow alleys into squares that reward you with fountains or streets exploding in aromatic sensations, masterful craftsmanship and views over dozens of minarets.

Fes was founded in 789 by Idriss I, who came from Baghdad and lead local Berbers to conquer the region and establish the Kingdom of Morocco. Shortly after, Muslims from Spain arrived in waves, running away from the Catholic Reconquista, and then the Tunisians. In the 9th century, the University of Al Quaraouiyine was built, now being the oldest in the world. This meant that Fes had a massive population by the 11th century, composed of Moors, Berbers, Jews, Turks, and Christians.

In 1250, it became the capital of Morocco and grew as a center of learning and commerce during the rule of the Marinids. A lot of magnificent buildings, monuments, and madrasas were built during this era is a characteristic mixture of Arab and Andalusian styles. The centuries that followed were a lot more agitated. The Wattasid Dynasty took over the city with the support of the Turks and then, in 1579, the Ottoman Empire finally conquered it. Fes lost its stature as the capital to Marrakesh and got it back during the 18th-century reign of Moulay Abdallah, only to lose again (to Rabat) when Morocco became a French protectorate in 1912. However, the city also gained a Ville Nouvelle, with large boulevards, completely different from the Medina.

What to see in Fes

Although Fes has three different parts, most attractions lie inside the walled-in medina of Fes el-Bali, literally a labyrinth of cobblestone lanes where donkeys and bicycles are the only means of transportation for the locals going about their business. You may very well decide to just wander around but a deeper exploration of this district and the other two in Marrakesh can be even more rewarding.

Do visit the souks and buy textiles, leather goods, ceramics, pottery, dried fruit,… You name it! Look for the bustling Bou Jeloud Square, which comes alive at dusk. Get to know the culture more deeply at Batha Museum (a valuable collection ranging from traditional Moroccan tiles to astrolabes and carpets), the Nejjarine Museum of Wooden Arts and Crafts, and Borj Nord (a military museum in a 16th-century fortress). Find Dar El Magan, a house with an interesting hydraulic clock. Enter Glaoui Palace and see the beautiful garden and the art gallery inside. Head to the Merenid Tombs to check out the ruins but also to discover the best view over the medina. To learn about the Jewish presence and culture, you must visit the Mellah, their old quarter. The spotlights here will be all over Rue des Mérinides (very different architecture, with verandahs made of wood and wrought iron), the small restored Aben-Danan Synagogue, the Jewish Museum, and the peaceful Jewish cemetery.

Inside the medina of Fes, surely you can’t miss the 11th-century Chaouwara Tanneries, the largest leather workshop in the city. You will see men working around stone vessels filled with colorful dye, using the ancient leather-making process. The best places to witness the action are the elevated terraces of shops where you can then get products such as handbags or sandals.

Kairaouine Mosque is Morocco’s second-largest (after Rabat’s Hassan II) and one of the most iconic landmarks in Fes. It has a green triangular-shaped roof and two historic minarets. It was right here that the university was created. The whole complex has fountains, courtyards, and an extremely old library. Entrance is limited to Muslims only.

Two extremely beautiful madrasas, Islamic schools of learning, are a great example of fine Merenid architecture. Madrasa Bou Inania was built between 1350 and 1357 by sultan Bou Inan. After its restoration, we can now again see the magnificently carved woodwork and stucco decoration. Madrasa el-Attarine is even older, constructed in 1325, by Abu Said. The courtyard has elaborate zellige tile work and cedar wood carvings. From the rooftop, it is possible to see the green-tiled roof of the Kairaouine Mosque.

Bab Boujeloud, also known as Blue Gate, is one of the medieval entrances to Fes, the most beautiful of a total of 15 gates. It looks older but it was built in 1913 to replace the original from the 12th century. The triple arch of the gate, in Moorish style, is one of the most photographed elements in the city.
To compare the different parts of Fes and comprehend its history a bit better, head to the other districts. Fes el Jedid was built during the 13th century once the Merenids realized that Fes el Bali was not big enough to accommodate every person in the city. This is where we find the Jewish quarter (described above), as well as the grand Royal Palace, used even today by the King of Morocco. The rhythm in Fes el Jedid is much more tranquil. As for Ville Nouvelle, it is the city’s modern center, developed by the French during the 20th century. Enjoy the fresh air that flows through the wide tree-lined avenues and relax at a café.