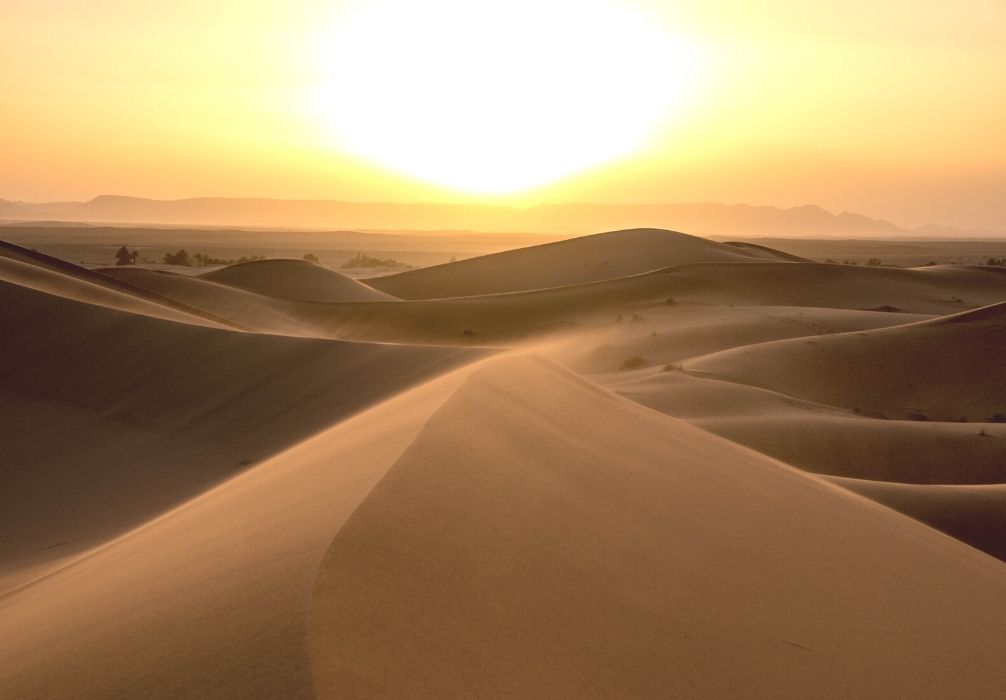 The small Merzouga village lies right at the brink of the Sahara Desert. This remote place is what you have envisioned for years when you thought about traditional Berber life. Merzouga fulfills your dreams with the highest sand dunes possibly sculpted by the wind. This is the ultimate desert destination for those longing for departing into the sunset on a camel caravan.

Merzouga is only 31 mi (50 km) from the border with Algeria, in eastern Morocco, not very far away from Erfoud and Rissani. The nearest large city is Errachidia, the capital of the province.

Merzouga is known for its friendly Berbers inhabitants, the majority of the population in the village. But it is also famous for its proximity to Erg Chebbi, an immense area of incredible sand dunes that are 3.1 mi (5 km) wide and stretch across 31 mi (50 km). “What is an erg?” – you might ask. It’s a large broad area of flat desert with dunes and little to no vegetation, actually, it is the Arabic word for “dune field”. Together with a few remote oases, probably your definition of a Saharan landscape. Well, this one is easily reachable. And it is waiting for you.

According to a legend orally passed through generations, Merzouga was once a tropical jungle. However, when a wealthy family refused to host a poor woman and her son, God transformed the area into a desert and buried the unhospitable family under Erg Chebbi. The fact is that you can find millenary rock art representing animals such as giraffes, elephants, and other mammals. Not quite animals that live in desertic places…

The reality is that Merzouga was a transit point for merchants on their way to Tombouctou and later became a pilgrimage point to the nomads of the Ait Atta tribes. So, there have been fortified villages in the region for centuries. With the arrival of tourism, people from the region merely extended their ancient welcoming culture.

What to see in Merzouga

Within the village of Merzouga itself, life is tranquil. It is a great place to simply relax and experience traditional Moroccan culture. Just sit comfortably and have a conversation over some mint tea. Shops here are much more pressure-free than the ones in the souks of big cities.

Heading west outside of the village, visit the Dayet Srji salt lake, especially in the Spring. This is a paradise for birdwatchers since many species flock here. Among many others, in the lake, expect to find flamingos, egrets, storks, ducks,… The dunes are home to native desert birds such as sand grouse and bustards. Listening to the wind up on the beautiful dunes and feeling the call of the desert in your soul while sleeping in the desert camps or staying in a hotel near the sand is a must for everybody who comes to this area. Bring your camera. And an open heart. Further away, the areas closer to Errachidia, the capital of the whole Drâa-Tafilalet region, bring a fresh new tone to the desertic landscapes.

Needless to say, the Erg Chebbi Dunes cannot be missed. Under no circumstance! Set off, by yourself or in good company, to go up and down these massive masses of orange sand. Sunrise is memorable, sunset is unbelievable. Take your time and look for unfamiliar reptiles like the Berber skink and the fringe-toed lizard. Especially at nighttime, discover large-eared mammals such as the jerboa and the fennec fox, who emerge from their refuges to hunt in the darkness. Camp out in the desert closer to the giant, most colossal dune. To get there, you will most probably be part of one of those camel caravans that create romantic silhouettes as the light fades away on the horizon. Once you arrive at your destination, sit around the crackling fire listening to music and the sounds of the desert while trying traditional Moroccan food. The sky above you will shine its stars over the night landscape. The next day, if you feel like chasing your adrenaline by renting a quad or an ATV. Go sand-boarding or sand-skiing. Go further, on a 4×4 expedition. Whatever you do, enjoy your desert experience to the fullest!

From Merzouga, it is a 40-minute drive to the village of Rissani. It is known for its market, with hundreds of stalls and shops. From any extremity, it seems endless! Very different from the souks, medinas, and other markets you find in the big cities of Morocco, the Rissani market sells livestock, food, spices, and other products. There is even a donkey parking lot… In the proximity, take a short detour to visit the ruins of Sijilmassa, once a major post for trans-Saharan trade.

The area around Merzouga, especially Erfoud, is famous for fossil quarries that go back hundreds of millions of years, as well as dinosaur bones. In many other places but mainly along the R702 road, you will come across several shacks selling mostly orthoceras, ammonites, and trilobite. But there are close to 500 different varieties!

Maamid Ksar, near Erfoud, in the Ziz Valley, is the biggest fortified city in the south of Morocco. Throughout the centuries, the tall mud walls protected the populations of the area from invaders and thieves. The houses set along narrow alleys are made of the same material, shading passers-by from the hot sun. It is a pleasure to visit the ksar surrounded by palm tree fields encountering extremely nice locals, always open for a conversation about their architectonic traditions.

If you arrive at Merzouga from the north or are driving that way, near Errachidia you will come across quite a sight. After leaving its craggy gorges, the Ziz River brings life to the Ziz Valley. Palm groves with millions and millions of trees are wedged between beautiful cliffs from the Jurassic period. Every road stop is a good one to admire the scene from all angles.