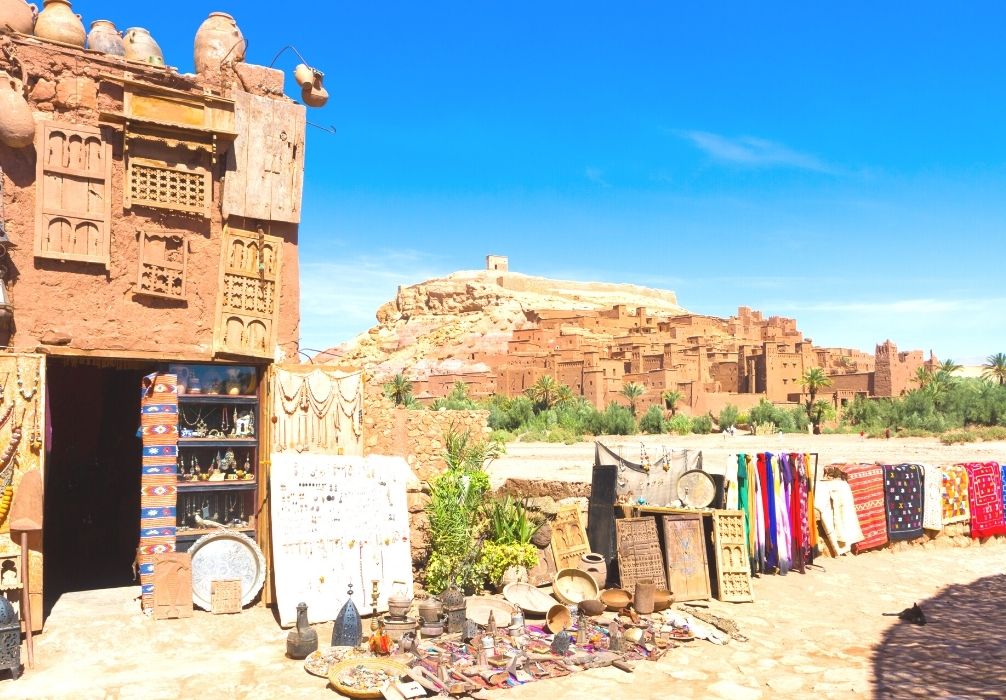 Ouarzazate is a romantic province, the beginning of the 1000 Kasbahs Route. It is a mix of the Atlas Mountains with high-altitude lakes, desertic landscapes, and oases. Its capital, bearing the same name, is a surprisingly vibrant city on a rocky plateau. People have been living in this area for centuries, one generation after another, drawn by the trade that happened in Taourirt Kasbah coming from the Atlas, as well as the Draa and Dades Valleys. The terrain is so impressive and mesmerizing that, for decades now, the “Ouarzawood” movie studios have been using it as a backdrop for many famous films.

The city of Ouarzazate is a popular stopover for round trips that leave Marrakesh, around 125 mi (200 km) away, to head for the Sahara Desert sand dunes. Its location brings hot Summers but also cold Winters due to the icy winds that blow from the High Atlas Mountains.

Such an environment is a lure for anybody wanting to see how the populations managed to survive and prosper due to commerce. But the city is very much worth seeing and be used as a base for the discovery of a zone so isolated and pacific that the Tamazight word for “noiseless”, Ouarzazate, was used to name it. People call it the “Door of the Desert”. Stay a while before crossing it.

The history of the Ouarzazate region is one of the times when this oasis was essential for those who crossed the desert towards the fortified village of Ait-Ben-Haddou. Trade was absolutely crucial and was the reason for tribal wars, seeking to dominate an area inhabited by both Berbers and nomads.

However, even though the old neighborhoods of Taourirt and Tassaoumat already existed before, it was only in the 20th century that the city of Ouarzazate itself was created, in 1928, as an isolated military outpost during the French Occupation. The perfect location determined the reason for its boom, especially because of tourism and the film industry. Today, Ouarzazate is also recognized for organizing the Marathon des Sables (Marathon of the Sands or Sahara Marathon) and for the gigantic solar power plant built to capture the energy of the sun.

What to see in Ouarzazate

The city of Ouarzazate itself is not very big but it is rich in attractions that tell tales of its past. The Tassoumaat Medina, near the riverbanks, is an interesting neighborhood full of life from people of Berber and Arab origins. It is a great place to interact with them, near the houses built in natural materials like mud. You will see women preparing bread to bake in the communal oven and children happily playing in the alleys. The liveliest place in Ouarzazate is Al-Mouahidine Square, where people get together and hang out, but Rue de la Poste and Mohammed VI avenue are great locations to see them too while you sip some Moroccan mint tea. The central market is yet another true energetic scene, held only on Sundays. An absolute must-visit since you are probably not going to find many tourists there.

Kasbah Tifoultout (just outside of Ouarzazate) and Kasbah Taourirt (in the city) are great introductions to this kind of fortified construction. The latter has 300 rooms! Appreciate the beautiful decoration of the main patio and the prayer room, from which you have a lovely view over Lake El Mansour Edhabbi. To get closer to nature, go much further away from Ouarzazate and hike on Jbel Mgoun, the third highest mountain of the High Atlas sub range at 13,356 ft / 4071 m. To witness the grandiosity of the mountains, also make sure you go to Anghomar Lake.

At the foothills of the southern slopes of the High Atlas, Ait-Ben-Haddou is the most famous ksar in the Ounila Valley, boasting buildings that do not appear to be earlier than the 17th century, even though the techniques used are more ancient. UNESCO considered Ait-Ben-Haddou a world heritage site in 1987 because it is truly a remarkable example of southern Moroccan architecture and also because it is the most well-preserved construction of its kind today. The whole place is quite a sight. Defensive walls reinforced by angle towers protect the houses inside, some humble, some looking like small urban castles. You can walk around this magnificent place of earthen constructions and try to discover the mosque, the public square, a caravanserai, a Muslim and a Jewish cemetery, the fortification, and a loft at the top of the village, and the Sanctuary of the Saint Sidi Ali or Amer.

Fint Oasis is a peaceful green paradise that adds color to the landscape in this part of Morocco, some sort of a desert garden. There is a flowing creek and four villages in the oasis. At the top of the hill, the view is amazing. You will find local women washing clothes and going about their quiet lives. Offer them a smile.

Despite Ait-Ben-Haddou being simply striking, you most definitely should also visit Kasbah Telouet, secluded up in the mountains off the beaten path. It is now a crumbling village since it was left in abandonment by the state after the local ruler, the Pasha El Glaoui, supported the rise to power of a Moroccan sympathetic to the French, Ben Arafa, prior to the return of King Mohammed V to the country and the declaration of independence of Morocco in 1956. Today, you can visit the “Traitor’s Palace” to see the Moorish architecture, painted ceilings, and ornate windows from which the view over the village and the mountains is unique.

Skoura Oasis and its notorious Kasbah Amridil, on the road to Boulmane Dades, is yet another adobe building near Ouarzazate. This time, one that is lush with vegetation once nurtured by three different rivers. Here, the lives of the locals flow at nature’s pace. When it rains heavily, both the oasis and the kasbah belonging to the Nassiri family get isolated for days. Restoration works already made in the 21st century have been gracious enough to maintain the fortification as original as possible.

The Ouarzazate area has been frequently used as a set for great Hollywood films. We are certain that you will recognize Ait-Ben-Haddou, Fint Oasis, and a number of kasbahs from films such as Babel, Prince of Persia, and the Kingdom of Heaven, to name just a few. The industry is so keen on this part of Morocco that it created CLA Studios and Atlas Studios, both located in the outskirts, on the road to Marrakesh. If they are not shooting by the time you come by, you can visit them. At CLA studios, look for resemblances with the scenarios of Lawrence of Arabia, Black Hawk Down, Gladiador, The Mummy, the TV series Game of Thrones,… At Atlas Studios, majestic Tibetan temples, Egyptian palaces, Roman buildings, and Moroccan kasbahs get really close to reality. You have probably heard of some films shot here such as The Jewel of the Nile and Asterix & Obelix: Mission Cleopatra. In the Cinema Museum of Ouarzazate, there are plenty of objects from the films and absolutely impressive sets. A great place for movie lovers too.