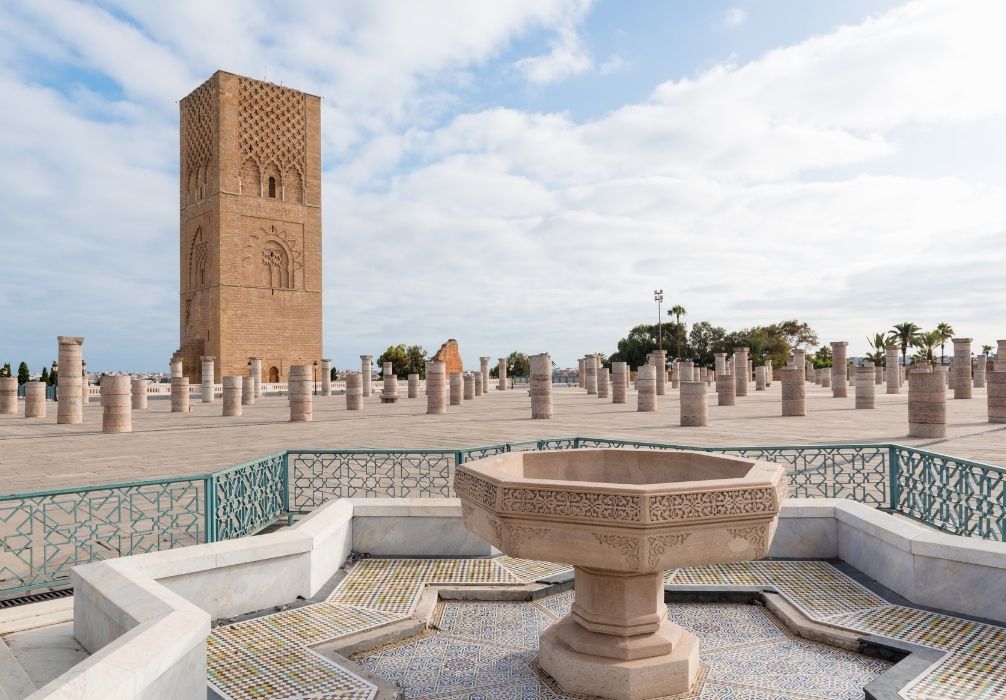 Unlike many capitals, Rabat is not the busiest of cities. The shores of the mouth of the Bou Regreg River were made to stroll along, as well as the beaches. The whole design of the city is an invitation to discover the marriage of yesterday and today, so recognized by UNESCO. Ancient walls and ruins tell old stories just like the archeological museums, while palaces and mausoleums glorify Morocco’s rulers. But, within walking distance, sometimes going through marvelous gardens, Rabat shows its other side. It is also a modern city, a cultural hub of recent museums, art galleries, and theaters.

Located in the left bank of Bouregreg River, across Salé, where it meets the Atlantic coast, Rabat is the political capital of Morocco. So, it is one of four Imperial Cities in the country (the other being Fes, Meknes, and Marrakesh). Rabat is a place of such cultural and architectonical wealth that UNESCO considered it World Heritage in 2012. The reasons are clear. It was capable of integrating the local Arabo-Muslim heritage of the Maghreb into its modern 20th-century version of European ideas. The result is an outstanding example of modern and refined town planning bringing together the past and honoring it.

Visiting Rabat’s quarters takes us through very distinct identities, each with its own charm: the older Medina and the Kasbah, the residential quarters, the middle-class housing of the modern city, the neo-traditional quarter of Habous de Diour Jamaâ. Like no other big city in Morocco, Rabat welcomes those who are fond of just going for a walk. Down Ville Nouvelle’s boulevards, in the middle of the palm trees. Inside the medina and around the Kasbah, witnessing striking monuments of a distant past. In the clean central beaches, surrounded by locals.

Even though we can go back further in time, we can say that Rabat was founded in the year of 1146, when Abd al-Mu’min turned the small village on site into a fortress of considerable size. Shortly after, the Almohad Caliph Abu Yusuf Yaqub al-Mansur decided to make Rabat his capital. With the death of the Caliph, Rabat gradually lost its importance.

In the 17th century, this was the set for the Bou Regreg Republic, formed by the union between Rabat and Salé, which was dedicated to piracy. After the French invasion of Morocco, at the beginning of the 20th century, the capital of the country was relocated from Fes to Rabat. 1913 saw the birth of the Ville Nouvelle (Rabat’s modern quarter). After its independence in 1956, Mohammed V, the then King of Morocco, kept Rabat as the capital city.

What to see in Rabat

It is no easy task to choose what to see in Rabat. We could plainly decide to just wander around contemplating proof of different eras and connecting the dots. But let’s start, for example, in the medina. In Rabat, this old area has a clear Andalusian style, since its buildings were primarily built in the 17th century, a time when Muslims from Spain’s Andalusia region arrived. Go everywhere. And don’t miss Rue Souka, the souks, and the Mellah (Jewish Quarter).

Rabat’s Ville Nouvelle has numerous points of interest for those really interested in Morocco’s past. Along the streets, you will find French colonial architecture and come to the interesting Archaeological Museum and the Postal Museum. Right in the center, the Mohammed VI Museum of Contemporary Arts was the first large-scale museum built in Morocco since its independence from France. It is a wonderful place to learn about Morocco’s modern art movement. In the south of Ville Nouvelle, built-in 1864, you can see Rabat’s Royal Palace, which you can not visit because it is the residence of the King. Nearby Sunna Mosque is a good location to take a photograph of the palace. Apart from the view over Rabat, crossing the river to the town of Salé gives us a glimpse into its beautiful medersas (Islamic schools of learning) and mausoleums. The 14th-century Abul Hassan Medersa from the Merenid era has a beautiful interior, with its religious decoration that includes zellige tile-work and carved wood panels. Have we mentioned all the interesting places in Rabat? Absolutely not! We said it was no easy task. We haven’t even mentioned some of the highlights. You will find them below.

Oudaias Kasbah is a peaceful 11th-century fortress with white-and-blue intertwining streets in Andalusian style. The kasbah mosque inside, in Rue el Jamma, is the earliest in Rabat at almost 900 years old. Here and there, take in the views over Salé and the Atlantic Ocean.

Within the Kasbah, there is a ground of great mystique called Andalusian Gardens. The French built them, during Morocco’s colonial period, to be a green refuge of paths made of stone and tile. Exotic plants and flowers perfume the air, swaying back and forth with the wind, together with the neighboring date trees. Inside the gardens, a sumptuous 17th-century lodge houses the Oudaias Museum. Go inside to see the exhibitions of old illuminated Qur’ans, pottery, jewelry, and musical instruments.

The Hassan Tower, built by the Almohads, was supposed to be the minaret of a grand mosque. But it remained unfinished after the death of its visionary, the ruler Yacoub al-Mansour, in 1150. Take your time observing the motifs and designs of the facade.

Upon the independence of Morocco and the return from exile in Madagascar, the king summoned thousands of his beloved Moroccans to thank Allah for this historic moment. The gathering happened in the very place where the Mausoleum of King Mohammed V lies today. If you are not a Muslim, entrance is not possible. But you can admire the beautifully decorated mausoleum’s tomb chamber from above. The Chellah Necropolis unites the remains of the 14th-century Merenid citadel-town of Chellah with much older Roman ruins. You can barely imagine life during Chellah’s prosperous years from the collapsed mosques and mausoleums. As for the Roman vestiges, they include a forum, a bath, and a temple dug in the excavations led by archaeologists after the 1930s.