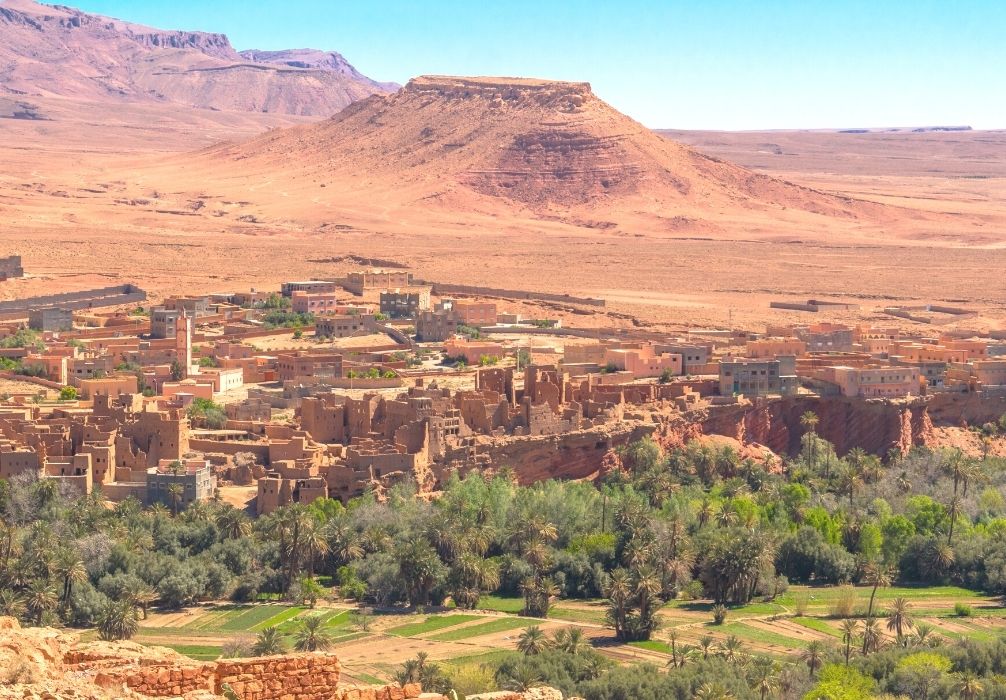 The route of a Thousand Kasbahs is the epitome of an enchanted land. The name entices our curiosity but doesn’t reveal it all. You see, it is no easy task to summarize its riches in only a few words. Nomad crossings flow into a rose or fig valleys and two-tone kasbahs. The deepest canyons let us go through into palm oasis. Berber mountain villages offer a glimpse of this immense beauty.

Introduction to the Route of 1000 Kasbahs

Tinghir is the capital of the province halfway between Ouarzazate and Merzouga, in the heart of the Todra Valley, between the High Atlas, in the north, and the rugged Jebel Saghro range, in the south. We are deep in the Souss-Massa-Draa region, in the south of Morocco.

The fabulous palmeraie of Tinghir turned into a city, an old French garrison where ksar, flowered gardens, and kasbahs await us. A 45-minute drive to the west brings us to Boulmane Dades, a city with amazing views. Take in the red-colored landscape, similar to the one in Mars, and the fig valley. Zigzag on the road in the Gorges du Dades, a canyon like no other. Find mountain villages like Boutghrar and breathe in the pure air you are given.

Populations most probably settled in the Todra Valley because of the date palms imported from the Middle East at the start of the Christian era. The first inhabitants were dark-skinned, followed by Amazigh or Berbers that imposed their language and culture. From the fifth century BC, the Jews started to come. Although Islam arrived in the 8th century, the Arab culture didn’t penetrate much in the region.

During the subsequent Berber dynasties (Almoravids, Almohads), prosperity was based on agriculture, caravan trade, and the silver mines. The Saadians came in the 16th century, then the Alaouites. The struggle of the tribes and the rulers of the region was fierce throughout the following centuries. Opposition was always evident, even during the 20th-century domination of Morocco by the French.

What to see in Tinghir and Boulmane Dades

Besides the region highlights you can find below, there are many interesting views around these parts. In Tinghir, discover decaying kasbahs, the abandoned 19th-century Medarsa Ikelane, and the ruins of Ksar Asfalou (a place where students of Muslim and Jewish faiths once studied together). Ait El Haj Ali district is Tinghir’s old Mellah. From the top, the Kasbah of Glaoui observes everything around. In the southern part of town, the kasbah of sheikh Basou Ou-Ali has a small photography museum depicting the most beautiful landscapes. Already on the road to Errachidia, the artisans in the village of El Hart are famous for the transformation of the dirt from the valley into pottery pieces such as dishes and decorative objects.

In Boulmane Dades, the obvious highlight is the road that arrives from the north, through the Dades Gorge. The town is built on the two banks of the river, which is accompanied by a small green oasis. It is a nice place to go for a peaceful stroll or venture into the mountains for some Berber nomad trekking. The nearby city of Kelaat M’gouna is known for the production of roses but also for a dance called “Ahidouss“, which consists of one line of men and a facing line of women, both singing and dancing. While you walk throughout the city, check out the old bridge, where local women dry their colorful carpets after having washed them in the river.

The Todra Gorge is a spectacular canyon about 9.3 mi (15 km) long. You really drive right through it, at the bottom of the cliffs and beside the Todra River. The average height of these cliffs is 1300 ft (400 m), turning this experience into something memorable. Expect to be in awe because of the contrast between the green oasis and the red rock formations. Inside the solid limestone walls, there are hundreds of climbing routes for the most daring rock climbers.

The Dades Gorge is another impressive canyon. But for different reasons. Snaking up or down the mountain following the road is rather dramatic and literally breathtaking. You will understand what we mean, for sure.

At the bottom of the Dades Gorge, the water that reaches the Dades Valley is key to the fertilization that translates into large fields of wheat or fig, almond, and olive trees. This is a natural and rough environment, between snow peaks and semi-desert grounds.

The name of the 1000 Kasbahs Road leaves no doubts. All along the 143 mi (230 km) between Ouarzazate and Goulmima and throughout the valleys and palm plantations, there are more kasbahs than you will dare to count. The old fortifications are the major appealing factor. In spite of that, you will not be disappointed with the rest of the scenery.

The Valley of Roses is a place as exuberant and fragrant as expected. After long stretches of pavement flanked by dry soil, it is hard to believe our eyes once we get to this place. From April to June, it is harvest time, the most extravagant season, especially during the May festival in the small town of Kelaat M’gouna. In the Kasbah des Roses co-operative, you can learn about what it takes to create valuable rose oil using the traditional method of steam distillation.