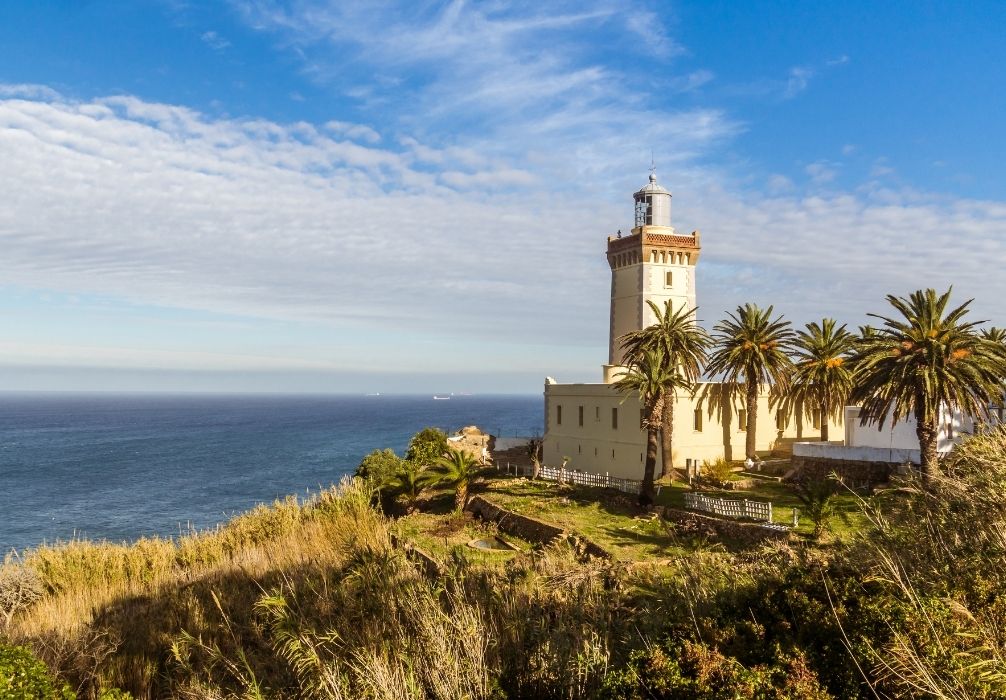 For centuries, Tangier has been Europe’s gateway to Africa, some sort of an unofficial guard to the narrow Strait of Gibraltar. It has become a fusion of cultures and influences that contributed greatly to its allure to such visitors as artists and even spies. Modern Tangier is thriving with a new look and set of investments that thankfully respect the legacy of the past. It is a fascinating Moroccan city with an interesting history and exotic atmosphere, beautiful sights, and friendly people.

Tangier sits in the northwestern part of Morocco, on the Maghreb coast. This is where the waters of the Mediterranean Sea meet the Atlantic Ocean, near Cape Spartel, at the entrance of the Strait of Gibraltar, overlooking nearby Spain. The city, the third most populous in Morocco, is the capital of the Tanger-Tetouan-Al Hoceima region.

Undoubtedly a port city, Tangier is an enticing place, a mixture of old-world traditions and modernity. If this is your first approach to Africa, you will soon start making plans to visit the rest of Morocco and the whole continent.

The history of Tangier could very well be told in a few words… or an entire book. Greek mythology states that the giant Antaeus founded the city (Tingi). Fact is, the Carthaginian and Phoenician sailors have visited it from as early as 500 BC. Throughout the centuries, many were the ruler peoples: the Berbers of Mauretania, the Romans, the Vandals, the Byzantines. The people converted to Islam but Berber tribes seized the city in AD 739, during the Kharijite rebellion. The Idrisid, Umayyads, and Fatimid dynasties followed. And then came the Almoravides and Almohades and the Hafsid and Merenids.

European influence arrived in the 14th century, together with their trade. The Portuguese conquered and occupied Tangier in 1471, at their second attempt. During a period of 3 centuries, Spain, Portugal, and England were the rulers. In the 17th century, the Moroccan sultan Moulay Ismail finally captured Tangier and reconstructed it. A period of a certain decline came, only to be followed by a revival that started in the 19th century.

What to see in Tangier

Obviously, like in most cities in Morocco, the medina quarter is the place where you will feel going back in time. Go back and forth, leave no street unvisited as you get fascinated by the vivacity and contrast Africa brings compared to neighboring Europe. In the northern part of old town, you will find the Kasbah, the place where the sultan once lived, in the Dar el-Makhzen Palace, built in the 17th century. Take notice of the details of the carved wooden ceilings, as well as the marble courtyard. A true display of Moroccan craftwork.

Moving forward two or three centuries, Tangier’s Ville Nouvelle brings a completely new architecture. Don’t miss the ocean view from Terrasse des Paresseux (Terrace of the Idle). Discover the Grand Socco (the main square), a favorite among locals to promenade, play or relax at a cafe. There is further shade up ahead, in the Mendoubia Gardens if you want to check out the fig and dragon trees. Go towards the coastline to find beautiful seaside villages used as inspiration for so many paintings. Tangier’s beach area is, again, a major spot for encountering locals enjoying the fresh air and playing football. Treat yourself to freshly squeezed orange juice, a must in northern Morocco. Leaving Tangier a bit behind, 25 mi (40 km) will be enough to get to know the Portuguese fortifications in the little town of Asilah walking through its imposing ramparts, bastions, and towers.

Let’s consider the whole Tangier’s medina as one single sight but let’s also dig deeper inside the labyrinth of alleyways. The center of it all is the square known as Petit Socco. A great place to spend some time just watching people going about their lives. Other great sights are the Church of the Immaculate Conception and the Grand Mosque.

The aforementioned Kasbah Museum tells the story of the past of Morocco across the various centuries. From early Roman sites like Lixus and Volubilis to the many pieces that date back to the different wars the country had to go through. The museum also goes into detail about the history of the city of Tangier itself. A great site to understand how the present came to be. Don’t miss the section dedicated to the Moroccan arts, where decorated ceramics are probably the most striking highlight.

St. Andrew’s Church is a strange and delightful place. It was built around the turn of the 20th century on a piece of land granted by Sultan Hassan to accommodate an Anglican church. Inside the peaceful church, you will find decoration in high Fassi style and, over the altar, the Lord’s Prayer in the Arabic language. Bringing the two religions even closer together, behind the altar, a cleft with carved quotes from the Quran shows the direction of the sacred Muslim city of Mecca. On the outside, there is a small cemetery that contains interesting tombstones from the early 20th century.

Moving a bit away from Tangier’s city center, only 9 mi (14 km), and moving towards the ocean, you can visit the beautiful Cape Spartel. Located about 1,000 ft (300 m) above sea level at the entrance to the Strait of Gibraltar, it has wonderful views over the Mediterranean Sea and the Atlantic Ocean. The lighthouse adds character to this natural place.

The Caves of Hercules are situated below Cape Spartel. You can reach them from Robinson Plage. There are signs of occupation in the Neolithic and, at a certain point in time, the caves were even mined and expanded. But what gives them their name and notoriety is, of course, the “fact” that the legendary Roman God Hercules used them once to take a rest and sleep. Believing Roman mythology or not, you should definitely take in the panoramic views and watch the birds flying all over the place.