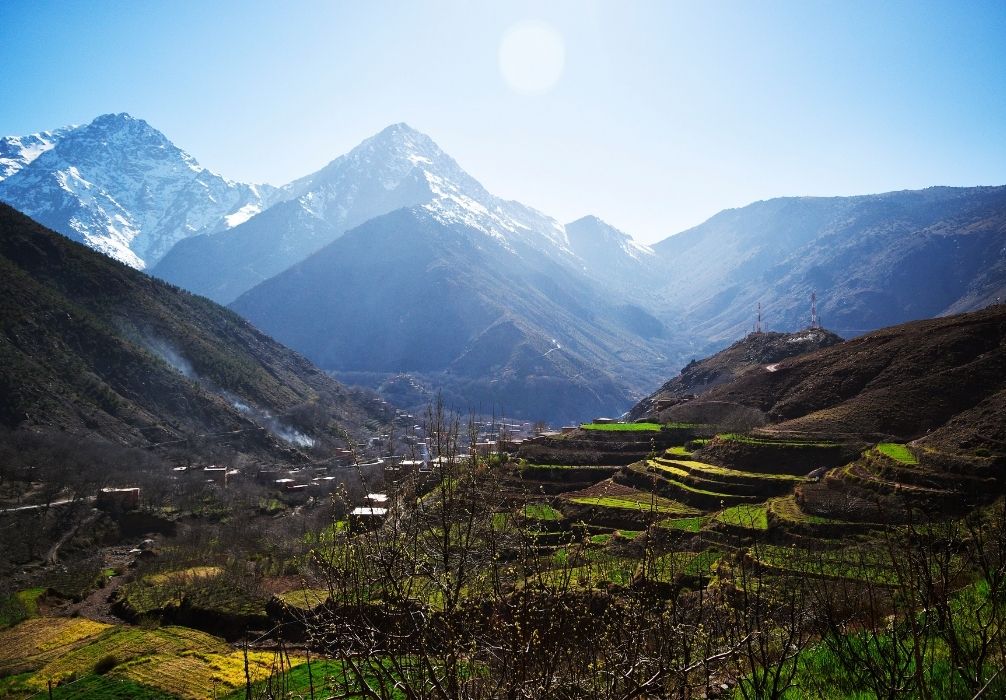 The first idea that comes to mind when we think of Morocco is not of rugged land. However, it is home to a significant part of the Atlas Mountains. They almost reach the skies at some points, while in others offer fertile valleys across pristine landscapes. Connecting the two extremes, there is a network of hiking paths used for centuries as a means of communication between the Berber villagers. This is where strong but welcoming people reside, proudly maintaining their culture and traditions alive still today, passed on orally. In the distance, the snow-covered peaks are the guardians of North Africa’s highest mountain range populations. Visiting some of the traditional villages is both inspiring and a privilege, as is hiking around witnessing pure nature.

Introduction to the Atlas Mountains

The Atlas Mountains start near the Atlantic Ocean Coast in Morocco, with Marrakesh at the tip. Then, they cross Algeria and end at Tunisia’s Mediterranean Coast, totaling 1,500 mi (2,500 km). There are 6 different sub-ranges in the whole Atlas Mountains, but only 3, the most striking, in Morocco. The Anti-Atlas extends from the Atlantic Ocean to the southwest of Morocco through contrasting landscapes, ending in Tafilalt, the largest oasis in the country. The Middle Atlas is the chain up north. It has narrow canyons, caves, and forests of cedars where the native Barbary macaque lives. The Ifrane National Park is quite a precious area. The High Atlas is the most famous part of the mountains, stretching from the Atlantic coast to the Moroccan-Algerian border. The main reason for the spotlight over this rugged terrain in the central part of Morocco is Toubkal, the highest summit in North Africa at 13,671 ft (4,167 m). The best way to climb the Toubkal, quite an accomplishment for the adventurous, is getting some help from a local Berber guide, someone whose family has been living in the mountains for generations.

The northern and southern regions are a whole different story. The former gets more rainfall from the nearby Mediterranean, which translates into lush green valleys that are perfect to accommodate the Berbers. The latter is much drier, leaving a rocky ground of secular canyons that suddenly culminate in green valleys dotted with herds of goats driven from remote Berber villages. These are ideal to learn about their culture. It is almost certain that you will be invited for a traditional Moroccan mint tea. Maybe even for a wedding…

The Atlas Mountains were formed during three distinct periods of Earth’s geology. The first tectonic deformation, in the High Atlas, occurred in the Paleozoic Era (around 300 million years ago) because of continental collisions. Later on, the Anti-Atlas Mountains were formed as part of Alleghenian orogeny. During the Mesozoic Era (around 66 million years ago), the widespread extension of the Earth’s crust that rifted and separated the continents formed the thick intracontinental sedimentary basins, with most of the rocks forming the surface of the present High Atlas being deposited under the ocean. Eventually, in the Paleogene and Neogene Periods (66 million to 1.8 million years ago), the mountain chains we see today were uplifted when the landmasses of Europe and Africa collided in the southern part of the Iberian Peninsula.

The Atlas Mountains have been acting as a blockade. They stop the advance of the Sahara Desert towards the sea, keep the Atlantic storms rains in the coastal fertile lowlands, and capture rain and snow that feeds streams and rivers. These conditions allowed the agricultural potential for peoples such as the Phoenicians, the Romans, the Arabs, the French. And, of course, the indigenous Berber peoples that still live there, with their distinctive languages and customs well preserved due to isolation.

What to see in the Atlas Mountains

Nature is the queen of the Atlas Mountains, with a glamour that elevates Morocco even further in this type of vacation, after the Atlantic Ocean/Mediterranean Sea views and the marvelous oases in the midst of the Sahara Desert. The landscapes in the Atlas Mountains may look endless, but you can get to “your end” once you define a target.

Journey across the valleys and canyons or set the bar much higher, at the peaks, in a trekkers’ paradise. Ride two wheels on a cycling or motorbiking adventure. Alternatively, sit comfortably on a 4×4 vehicle that takes shows you the wildlife in the forests and small ancient kasbahs. Discover the brave Berber people and find out their history and real mountain living.

Used as a hub for mountain tourism in Morocco, Imlil is a small village 56 miles (90 km) south of Marrakesh. Arriving there through the winding road crossing the valley is already breathtaking. Notice even smaller Berber villages, walnut trees, and slow-moving rivers as you get there. Spring brings flowering and a new rebirth in the High Atlas foothills. Those not interested in climbing to the top of the mountains, can go cycling, horseback riding or just enjoy a hot Moroccan mint tea while looking at the scenery from a terrace.

Toubkal National Park is definitely the most impressive part of the Atlas Mountains. It is the place to go if you love being in the wild with family and friends and venture on memorable hikes. The majestic Mount Toubkal attracts us to its high summit like a magnet. Most treks to the top start in the rural village of Imlil, the place where you should get a guide, hire a mule, and stock up to the big climb. You will see all types of trees at the bottom (Holm-oak, Juniper, Atlas Cedar, Argan, Kermes Oak,…), with the landscape getting arider as you go up. Hodgepodge is at different altitude levels. The trek usually stops at Refuge du Toubkal, the place to spend the night and get acclimatized before the big conquest the following day.

Where there are mountains, there are valleys. The Atlas Mountains are no exception. These low areas provide some of the best views over the summits. Azzaden Valley is a more quiet alternative to Imlil, at only a six-hour walk distance. The Ourika Valley is located 25 mi (40 km) southeast of Marrakesh, which makes it a popular day trip from the Red City. Try to visit it on a Monday to check out the local souk. Appreciate the green and learn about the women’s argan oil co-operative.

In the Middle Atlas sub-range, one of the highlights is, without a doubt, the Ifrane National Park, only 50 mi (80 km) south of Fes. With a forest of cedars and oaks, it is the home of the world’s largest population of Barbary macaques, living in families of 10 to 30 individuals. The Cedre Gouraud Forest is a great to see the macaques from the road. Nearby Azrou is a good spot to find accommodation and get a glimpse of how people live in a mountain city. But if you are a winter sports fan and there is snow painting the landscape, head to Ifrane ski resort, a 20-minute drive from Azrou.

The Atlas Mountains are famous for their impressive gorges. Todgha Gorge, near the town of Tinghir, attracts hikers, photographers, and daring rock climbers alike. Berrem Gorge can be found near Midelt. This fabulous canyon is imposing from both the top and the bottom. Before you get there, or when leaving, you will be able to see plantations of plums, apricots, pomegranates, and walnuts.