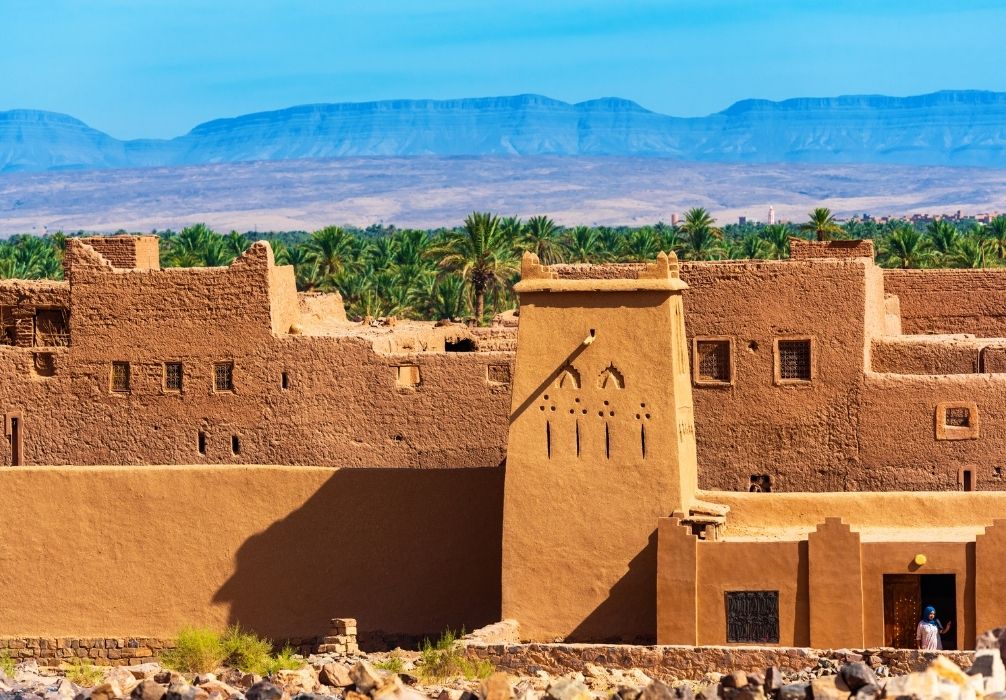 Far, far away in the south of Morocco, there is a desertic place dotted with oases, a historical stronghold of the Almoravid empire with a fascinating past of camel caravan memories. Zagora brings us closer to the independent and nomadic Berber culture. It also presents us with vast scenery that stretches beyond our eyes. A world made of mountain passes, lush valleys with uncountable palm trees, sand dunes, and ergs.

Zagora is both the name of a town and a whole province. The province is located roughly halfway between Ouarzazate and the Erg Chebbi Dunes, in the Merzouga area. Zagora usually serves as a base camp for desert excursions that can set off on a 4×4 vehicle, on foot, or on camelback.

You can surely visit the tall dunes of the ergs, a broad flat area covered with sand dunes that shift according to the liking of the winds. But you can also explore the luxuriant Draa Valley and its palm groves or look for rock engravings or old kasbahs and ksour that tell the story of territory at the crossroads of cultures from across Africa.

People have been living in the oasis for a long time. But history started to be more clearly written during the Almoravids’ presence, who built a fortress on top of Jebel Zagora in the 11th century. Its remains still lie there today.

In the 16th and 17th centuries, the Saadyin emperors governed Morocco. One of them, Sultan Ahmed El Mansour, decided to turn Zagora into a customs point for camel caravans going back and forth to Tombouctou, in Mali. Trade was extremely important in the area as caravans passed the Draa Valley coming from the sub-Saharan regions. Today, Zagora is rapidly developing and is the capital of the province.

What to see in Zagora

In the small town of Zagora, before you set to discover the epic surroundings, you can learn about the region. The small Musee des Arts Et Traditions de la Vallee de Draa, in the mud-brick Ksar Tissergate, shows how traditional life in the Draa Valley is like. This museum displays different items, including jewelry, weapons, and wedding outfits. Every Sunday and Wednesday, it is time to visit the biggest souk in the south of Morocco. Expect to find everything, from food and livestock to household items and clothes. If you visit in the Autumn date season, look for the massive date market. Street Art can be found in the residential neighborhoods close to the town center, mainly paintings representing the region’s palm trees and traditional kasbahs. Both a historical and an artistic feature, there is also a sign indicating the distance to Tombouctou, only a 52-day journey by camel…

Jebel Zagora, the mountain which gave its name to the town, is right on the outskirts. Take up the challenge of climbing, at least, one of the double peaks (both around 3,300 ft / 1000 m tall) that are part of the Little Atlas Range. Next to Zagora, the village of Amezrou is partially crumbling and partially restored. In this mudbrick Mellah, the Jewish quarter, we can still find silversmiths carrying on this ancient craft. Heading southeast, the village of Tamegroute is famous for its green pottery and a 700-year-old Quranic Library next to a small madrasa. A bit further down the road, you will encounter the Tinfou Dunes. Consider them as your introduction to the sandy Sahara Desert, where you can ride a camel or simply walk up and down the sand or on the crests to capture a view over the endless landscape.

In the deep south of Morocco, the Draa Valley can be reached from Ouarzazate following the N9 until the Sahara Desert. Water flows here from the High Atlas Mountains, sometimes emerging into lush oases. Eventually, you will find Berber villages, sand dunes, green plains, kasbahs, ancient cave paintings, and carvings. It is a vast beautiful region with a history of battles between nomadic tribes and trade between Arab, Jewish, Berber, and Christian civilizations. Proof of that can be found in the kasbahs, fortresses built with mud and straw collected in the Draa river banks. Nowadays, some of these fortifications are still inhabited, like Amezrou, Tamnougalt, El Caid Ouslim, Ait Hammou Ousaid, and Touririt. The Berbers who live here have maintained their customs alive to this day.

Something you will absolutely not miss around Zagora and the entire Draa Valley is the sea of palm trees along the road. We are talking about millions and millions of them! The delicious dates produced here are harvested from September to mid-November. If you can’t see the harvest… try as many dates as it is humanly possible.

Further away from Zagora but still within the province, the M’hamid Dunes are also great for desert adventures. They are literally the end of the road (Route National 9). From this oasis on, you will find only Sahara sand, caravan trails, and shepherds. M’hamid area was once a place of gathering for caravans leaving for Tombouctou, inhabited by Ait Atta Berbers, local Drawa, and Hassani tribes.

Try to visualize an ocean of sand… That’s Erg Chegaga, a golden sand area, the largest and wildest erg in Morocco. Its remote location, 35 mi (56km) southwest of M’Hamid, means that it is untouched and receives a lot fewer visitors than Erg Chebbi, near Merzouga. The desert experience in Erg Chegaga is a peaceful, romantic one, an absolute immersion.

Iriqui National Park lies between the Draa River and the southern foothills of the Anti-Atlas. Here, you can find the typical desert landscape of southern Morocco, with wooded steppe and savanna with acacias. When it rains, Lake Iriqui turns into a temporary wetland that calls upon migratory waterbirds such as geese, coots, and flamingos. You can also see North African ostriches, barbary sheep, houbara bustards, dorcas gazelles, oryxes, and striped hyenas. As for reptiles, it is home to a variety of snakes, lizards, chameleons, geckos, and wyches.